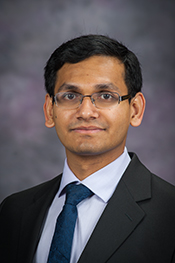 To settle for nothing but the best is a nice motivating sentiment, but one that doesn’t always work in the real world.

In transportation logistics, for example, finding the best solution to a routing problem with millions of possibilities could take days to compute. When companies need immediate answers, they often have to settle for good enough.

This reality is, in part, what drove Ashesh Sinha, IMSE assistant professor, from industry to academia. Sinha isn’t interested in good enough. He wants the best, and is now working with his former employer to help bring the “best” back to the real world.

During his first semester at Kansas State University, Sinha navigated a challenging industry-university partnership between Schneider, a transportation logistics company, and K-State, to arrange a $100,000 one-year project titled “Dispatch Strategies in Intermodal Transportation: A Feasibility and Validation Study.”

Focused on intermodal transportation services, Sinha is designing a model to optimize routes for truck drivers that include collecting freight containers from railway carriers, delivering shipments to customers, and picking up and returning empty containers.

Using a column generation approach, in which a finite number of possibilities are evaluated before determining if more should be considered, as well as parallel computing methods, Sinha cuts down on the model’s runtime so the problem can be re-solved every five to 10 minutes. When the project is complete, Schneider drivers will have near real-time data with optimized routes.

“In this five-minute time, many things could happen,” Sinha said. “The customer might cancel the order or change the delivery time. The railway shipment might be late. You have to solve it continuously because the data is always changing.”

He accounts for a variety of uncertain variables — such as weather and traffic conditions, and railway schedules — using integer programming.

With this project, Schneider hopes to overcome a number of limitations to its current dispatch system, including long run cycles and apparently feasible routes that prove counterintuitive in reality.

While Schneider’s team works to develop the software and user interface for the final product, Sinha said his research is the heart of the project. “This is the core that optimizes everything,” he said. “If this does not work, then nothing works.”

Even so, the project almost didn’t happen.

Due to concerns over intellectual property rights, both parties nearly gave up on the deal, but K-State and one champion at Schneider kept the project alive until the two could agree.

For Sinha, the main perk is being able to test his model with real data. “The optimization is similar to what I do in my research,” he said, “but without industry collaboration, I have to assume random data. Real results and real data produce much more valuable research.”

A previous project Sinha began while working at Schneider and finished at K-State, titled “Dispatch Optimization in Bulk Tanker Transport Operations,” was named a finalist for the Daniel H. Wagner Prize for Excellence in Operations Research Practice and will be published in Interfaces, the leading INFORMS journal for operations research practice.

Sinha completed his doctorate in industrial engineering from the University of Wisconsin-Madison in 2016. Before coming to K-State in August 2017, he worked at Schneider as an optimization engineer.