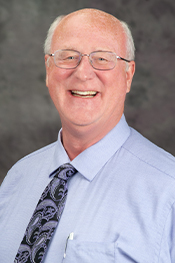 Professional Experience
Dr. Bradley Kramer earned bachelor's, master's and doctorate degrees in industrial engineering from Kansas State University. He began his academic career as an assistant professor in the department of industrial engineering at K-State in 1985. Kramer has served as department head since 1993 and added the role of Director of the Advanced Manufacturing Institute in 2000. Since 2006, he has been honored to hold the Ike and Letty Evans Engineering Chair.

Research
Kramer’s research has been primarily application- and integration-focused. He has completed major research projects in manufacturing engineering, engineering education, product and technology innovation, and regional innovation. Kramer has garnered extramural support from the National Science Foundation, U.S. Department of Commerce, U.S. Department of Agriculture, the Society of Manufacturing Engineers, Kansas Department of Commerce, the Kansas Technology Enterprise Corporation and private industry. As Director of the Advanced Manufacturing Institute (AMI), Kramer has worked to build an organization with a mission to advance technologies, people, and companies through collaborative engineering and business partnerships. AMI has conducted more than 2,500 technology and product development projects with more than 500 different companies from across the nation.

Academic Highlights
During his career, Kramer has been responsible for more than $24 million in competitive funding. He has been recognized with various awards for outstanding teaching, outstanding advising and for being an outstanding academic department head at K-State. He is a Tau Beta Pi Eminent Engineer and a member of Phi Kappa Pi, Sigma Xi, and Alpha Pi Mu. He has received the ASEE/Dow Outstanding Young Faculty Award, and the Ralph Teetor Outstanding Engineering Educator Award. Kramer has been invited to present his work in regional innovation through nation-wide webinars and to a group of European Union and U.S. diplomats. The University Economic Development Association (UEDA) awarded AMI the 2012 Award of Excellence in the Leadership and Collaboration Category for its best practices work associated with the Kansas Opportunity Innovation Network. In addition to this award, our work received the first ever, “Judges' Award” as the marquee example of university-based economic development. Dr. Kramer’s first first Partnerships For Innovation (PFI) grant was identified by NSF as a best practice project. Kramer is a key organizer of widely acclaimed annual NSF CAREER Proposal Writing Workshop that has been shown to significantly enhance participant’s success in earning NSF research awards.